Let’s learn about .. the Venetian Loggia of Heraklion Crete 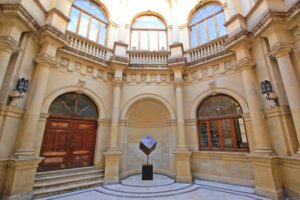 In the center of Heraklion Town, on the square of Saint Titus and along 25th August street, you will find an impressive building of the Venetian times that has survived and functions till today: the Venetian Loggia, a typical construction of the Venetian rule, has been renovated and hosts today the Town Hall of Heraklion.

The Loggia that survives today in Heraklion was built in 1620 by the Venetian Morozini, an architect who had also constructed many other public works in the town. According to historical accounts, there were other three previous loggias before this one, but for various occasions, they were not functional until this last was constructed.

The Loggia was a place for the Venetian noblemen to gather and discuss the local economic and social issues. It also worked as a Club, in modern terms. This is a rectangular building with an open adit on the ground floor. The ground floor was built following the Doric style, that is austere and severe, and the upper floors had a more Ionian style, with ornaments and nice decorations.

When the Turks conquered Crete, they made the Loggia their administrative center. When Crete became autonomous in 1898, the Loggia was in bad state and would face the danger to collapse. The works for its renovation started in 1915 but they were interrupted by the Second World War in 1940.

Today, the Loggia of Heraklion has been fully renovated and houses the Town Hall. In fact, it is considered as the most elegant Venetian building in Crete and in 1987, it received the Europa Nostra award as the best-renovated monument of the country.